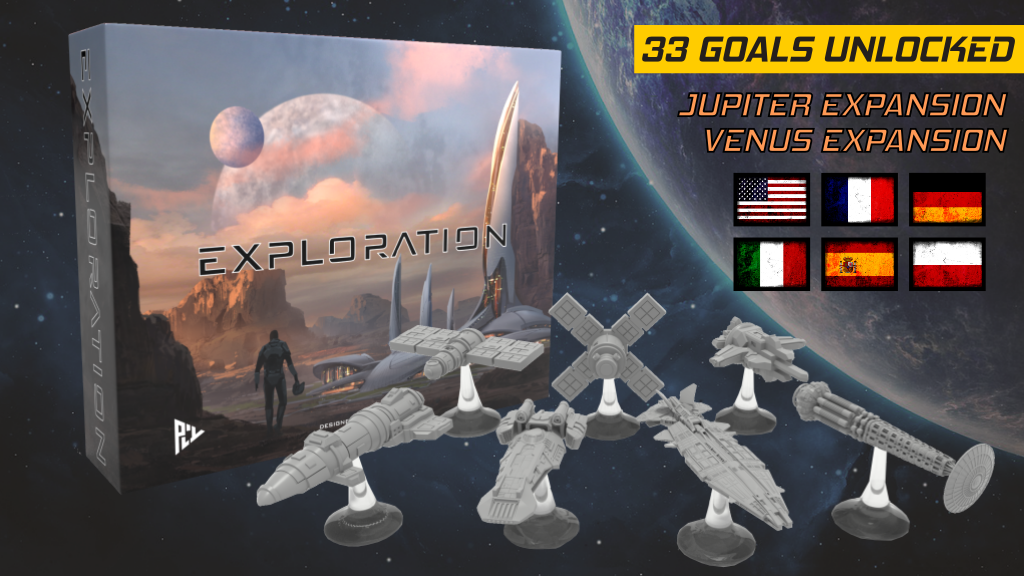 Latest Updates from Our Project:

Dear all, I am extremely happy to announce that we are funded! Thank you all for support! We have been waiting for this moment for several months. It was a good time for Exploration. We made many improvements in campaign and gameplay. Getting funded is not the end. Now we can make those improvements alive!

We are all so happy, but what next?

Modular board is the first stretch goal to unlock. At the beginning there will be 8 hex tiles. They will be used when you decide to explore outerspace. Using it you will be able to receive great bonuses without losing your spaceship like it is in core box version. The modular board adds strategic possibilities and gives the game a pleasant feeling of discovering new fragments of space.

Several hours ago we unlocked a bigger size of miniature - 120 mm. Good job! Now we are on way to unlock 140 mm. To do it we need additional 17 backers.

After funding we have more time to think about printed version in French language. 39 of us are French plus there might be some French-speaking Canadians. Soon we will know more about it. Second language which might be also considered is German. 30 of us are living in Germany.

I have one question to you. Is a printed version of rule book, added to your game box satisfying? I mean that you will receive english version of game with english rulebook plus rulebook in your language.

Last two days was crazy. Thank you all for support once again!

See you in the next update

Hello all! Welcome in the first project update. First of all I would like to say thank you very much for supporting Exploration. We are very close to fund this game and we have far better results than in the first campaign. Anyway let's go to the point.

Me and my time decided to add a funding goal to our project. During preparation time we did many great improvements. It was made for you and that's why we want to give it to you! We will add Jupiter board and drill module to every pledge including Exploration core box. Below you can see how the game will present with Jupiter expansion.

You can support funding by sharing and liking our FB post and Tweet. Both of them include the image below.

To get funded until end of campaign Exploration needs around 4 backers per day. Many gamers still didn't hear about Exploration and we want to minimize the number of people who will miss Early Bird reward without even know about it. This is the reason of extended time for Early Bird to first 72h of campaign.

We need 11 backers and miniature size will increase to 120 mm in lenght. We almost have it!

We passed level 1 for two languages: French and German. As we promissed we will start now to work with draft rulebook versions to finish them until end of campaign.

See you soon in the next update